One parent rocks the whole school

Something totally crazy happened at the children's school yesterday. It's so crazy that I'm still struggling to get my head around it and I'd love to hear your thoughts...

We've had a temporary Headteacher for the last year. He came out of retirement to step in until a new permanent head could be found.
He's amazing, a breath of fresh air to a school that had become sad and tired around the edges. He arrived bursting with ideas, passion and experience. He won the children over and he won the parents over too. The school was smitten.

He introduced good behaviour awards, ditched the old 'non competitive' routine, pushed the children to excel, to reach high, to aim high. He made the school a really happy place.

One of the things he had promised come the end of the school year was a special 'Headteachers Trip'. The culmination of the year long reward strategy where children who had achieved 'Star Pupil' status and not received an inappropriate behaviour form would be treated to a day out.

The children were excited, the parents were impressed.

They knuckled down and worked hard to achieve team points and class stars in order to become a 'Star Pupil'. One by one they took their place at the front of assembly to collected their coveted Star.

As good behaviour and hard work is rewarded, so inappropriate behaviour results in a dreaded pink slip and to secure a place on the 'Headteachers Trip, you needed to be a pink slip free zone.

Sonny and Betty managed it and Biba accepts that she deserved her 3 pink slips for chattering when she should have been working (not sure where she gets that from).

Today was supposed to be trip day but Betty arrived home from school last night with the below letter in her hand and tears in her eyes. 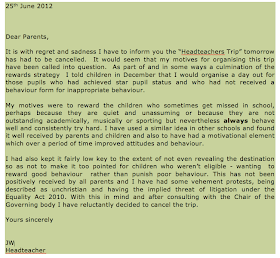 Reading it took my breath away. Can you believe that someone would stoop as low as this? Are they in denial about their child's behaviour? What kind of example are they setting by kicking off in this way and threatening legal action? It beggars belief.

Key Stage 2 parents are up in arms. Not only at the way this parent has behaved but also because they don't have the guts to come forward and explain their motives.

And our 'Star Pupils' are left questioning why they worked so hard all year when they have effectively been punished.

UPDATE...
You will see from the comments that this has been accused of being a witch hunt. This is not the case and I would like to offer the parents involved the opportunity to tell their side of the situation by commenting below. You don't need to be registered to do so and you can remain anonymous if you wish.
at 20:15

Thanks for taking the time to share your thoughts. Appreciated as always. xx